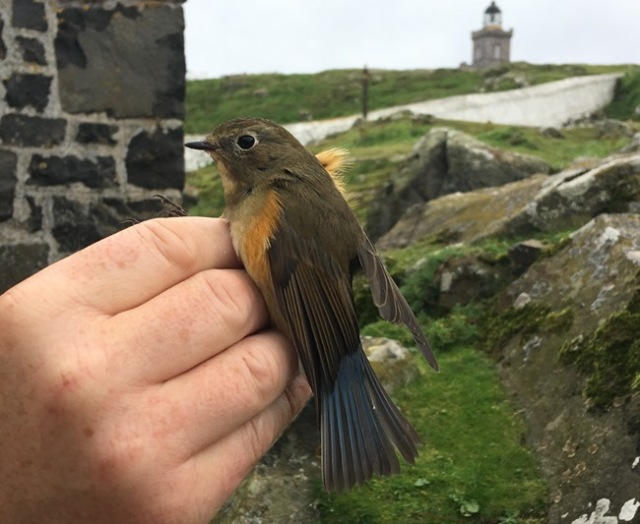 No mistaking this visitor!

Friday 4th October comments: The month of October can be a make-or-break month for the Isle of May (from a birding perspective) as with migration in full swing, we can experience some amazing days with thousands of birds or nothing at all as it all depends on the weather.

Last October we had very little arrive as the month was dominated by westerly winds. However the opening few days of this October have been productive with plenty keeping us occupied including hundreds of Redwings (the first arrival of birds came in today) with a good scattering of warblers including five Yellow-browed Warblers.

However just after 14:15, all previous bird sightings were eclipsed by the spectacular news that a RED-FLANKED BLUETAIL had been seen then caught and ringed at the Bird Observatory. Everyone present on the island was soon running to the spot to witness the bird being released and watched in pure joy as it fed amongst the bushes nearby until dusk.

For any birder this is a jewel in the crown and although the number of British records of this species has increased in recent years (due to range expansion) it still is a beauty to behold (as the photos show). This represents only the second ever record for the island following one on 14th October 1975 (we’ve waited a while for our second!) Interestingly that bird was only the 12th for the UK but there have been many more but just not on here…until now.

What a magical way to start October and everyone present will be having a beer or two tonight to celebrate. The Isle of May strikes again; we’re having a good year…