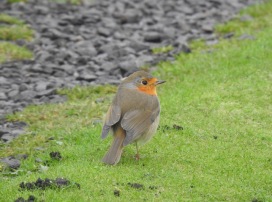 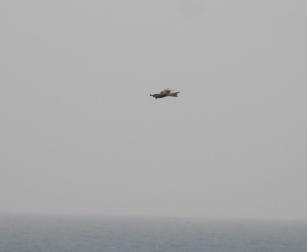 Monday 7th October comments: It proved to be a very busy weekend on the Isle of May as the wind strength increased from the east and the floodgates opened. Migration is an amazing thing but to witness it on this scale in the UK is just a very unique and privileged experience.

As dawn was breaking the air was thick with the sound of thrushes; Redwing and Song Thrush all migrating into the UK for the winter. However Blackbirds were caught up in the movement and a hugely impressive total of Ring Ouzels as we recorded 50 of these mountain thrushes during the day (a good count for the island). Birds kept on coming as Robins were discovered in huge numbers (over 200 on the island) and influxes of Goldcrests and Chiffchaffs. The totals below give you some scale of the day.

As expected amongst the thousands of common birds, more unusual migrants were seen. The star visitor the Red-flanked Bluetail remained for its third day whilst Common Rosefinch, Yellow-browed Warblers and Shorelark were all noted. A Red Kite drifted over the island only the eighth ever whilst a Richard’s Pipit was seen for the first time since 2015. However mid-afternoon brought hushed tones as a Great Grey Shrike arrived from the continent. This top predator (known as a Butcher bird – enough said) will devour small passerines (Goldcrest beware) whilst the island mice should start to worry…

All in all, an impressive day and check out the totals…. The Isle of May in action