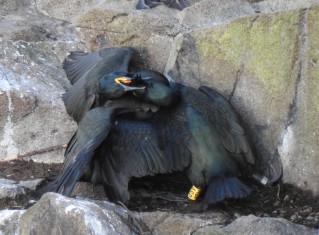 Thursday 27th February comments: Its very early days in the seabird breeding season with Guillemots and Razorbills attending the cliffs in ever increasing numbers whilst Eiders and Fulmars are scattered across and around the island. On the clifftops adult Shags are sporting their radiant summer crests and are starting to pair off as they eye the nesting season just around the corner.

The majority of our Shags remain around the island throughout the winter roosting nightly and feeding in the surrounding waters. They generally are the first to nest as the first eggs are discovered in late March-early April ahead of the majority of other seabirds. Over the last few days its been noticeable that some birds are now paired up at traditional nest sites with a few rudimentary nests constructed. However its interesting to delve into the life of our seabirds and yesterday we witnessed an impressive territorial dispute between two birds…

An adult ringed with a red colour ring (DIF) was attacked by an intruder sporting a yellow ring (ASP). The birds went at each other over the course of twenty minutes with the mate of DIF occasionally joining in to help. At one stage both birds were showing bleeding around the face and the savage encounter continued (as shown in the photos above). Thankfully before any harm came to either bird, the intruder backed off and disappeared leaving a bruised but happy DIF in place with its mate returning.

These early season squabbles are not often encountered but impressive to see and thankfully without a bad outcome. This is a fresh reminder that the seabird season is just about to start and we can’t wait. Hopefully you’ll all be joining us to visit the spectacular Isle of May this season as our doors open from 1st April. We look forward to seeing you!