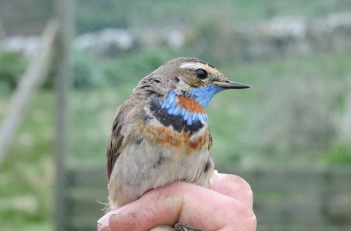 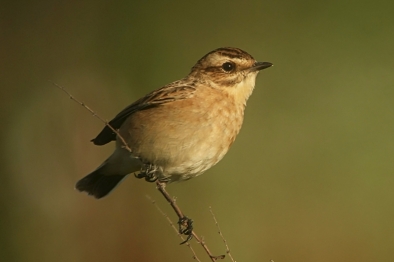 Whinchats on the move through the Isle of May (Stevie Kane)

First Willow Warblers on the move through the island

Monday 11th May comments: The Isle of May is internationally important for its breeding seabird assemblage and its Grey Seal nurseries in the autumn. However did you know it is important for migratory birds as well?

At this time of year, we experience a high influx of migrant birds as they flood into the country from their wintering grounds in the south. Various birds are arriving, some heading into Scotland to breed whilst others are just stage stopping as they head even further north. The island acts as a ‘service-station’ as birds will stop off on the island to fuel up on valuable food (mainly seeds and insects) whilst also talking advantage of the resting stop. With no ground predators and (at this time of year) very few aerial predators (no resident birds of prey) it also offers a safe sanctuary to stop.

It’s not just the combination of these factors as it can be the difference between life and death. If birds are caught out by inclement weather whilst migrating across the North Sea, and the island can mean the difference as it is a godsend for those which make it.

At this time of year we would expect a good variety of species including several warblers as Chiffchaffs and Willow Warblers would be numerous with Whitethorats and Lesser Whitethroats arriving from sub-Saharan Africa. More scarce visitors would include Sedge and Reed Warblers, whilst a running (yes they run along the ground) Grasshopper Warblers would always be a nice addition to the day. Other warblers such as Blackcaps and Garden Warblers would be seen in small numbers.

Other birds include Wheatears are returning from their wintering grounds in Africa to breed in Scotland but the island also hosts the ‘Greenland’ race of wheatears; a bird which breeds in Greenland but winters in Africa, going via the Isle of May (impressive or what!) Other summer breeding migrants such as Whinchats would be seen whilst Swallows, Sand Martin, House Martin and Swifts would be passing over. As you would expect, the Isle of May also attracts more unusual birds and is one of the best places in the UK for the scarce Bluethroat. Last May we welcomed up to 15 of these distinguished guests as they moved north.

The Isle of May will never cease to amaze and it’s impressive what you can see and it will no doubt bring many more highlights in the future.